This reflection will follow the method of Theological Reflection described by Killen and De Beer . This method is well suited to reflection on feelings arising from experience gained through ministry. I will follow the five steps from Experience, Feelings, Images, Insight and finish with suggestions for future Action

I arrived in St Michael's, Bray, after just over two years of curacy in a different parish. It was a period of starting afresh. As a pioneer curate I have a number of criteria to demonstrate for my assessment. These involve starting and bringing to maturity a Fresh Expression of church. This was going to be a tall order for this new post given I would have just over six months until my final assessment! In addition, the Pandemic situation ruled out meeting new people especially as we were in the second national lockdown and soon to enter a third.

I had been given another task to start online communities and was aiming that this would make the meat of the project I needed for assessment. However, I was finding little traction in this project.

In a November meeting with my Pioneer Supervisor we looked at the different options open to me and was given some realistic advice about the potential outcomes of some initiatives. My supervisor then made a throw away comment of ‘Well you could always start a Minecraft church’. I thought, yes I probably could do that. I recall I felt instinctively that I could get something substantial up and running by February.

I knew Minecraft very well. My elder children discovered it in its early days and we bought our first ‘username’ at half-price as it was in early release. All four of my children play the game and have been mixing on online servers doing multiplayer battles, games and building. The building had limited success. I had set up some servers before with huge amounts of pulling teeth and frustration at the sporadic and mostly out of date documentation the global community around the game had made. But I knew I could do that. I have long wanted to use Minecraft as a storytelling environment in church before. The Minecraft Visual Bible proved popular in our house. My kids had struggled to engage with online church; I had asked them to sit with laptops and create their own versions of the stories we were following in church. They loved this and made amazing creations.

I realised that young people were desperately frustrated and needed to be together socially and thought I could see how this may be an initiative to help them at a really difficult time. I also grasped that although it was an online endeavour this would be something that could lead to offline meetings as restrictions raised.

So after consultation with my Training Incumbent, we started a pilot Christingle service online before Christmas. All my children got involved and we were dreaming up stuff around the kitchen table. This was also the table we had begun praying around as a family since the first lockdown with a form of Morning prayer.

I shared what I was doing online and got a lot of interest from clergy colleagues who had eager young Minecraft mad children. There was a surprising eagerness to engage and many said that the normal church online offerings were not engaging their own children. In January I ran another session. This was successful and it was so clear that we needed to keep going so I made the immediate decision to do weekly Sunday evenings. It has grown numerically consistently since then. At twelve weeks in we have a regular 26 online together and at least 30 young people on the books (and adults!) There is great enthusiasm. There is clear evidence that it is meeting the social need and growing evidence of spiritual growth. It has led to two interviews, a radio interview and invites to share what we are doing at a Messy church festival. We are also fully funded for the entire first year.

My feelings initially were at a very low ebb. I could not see a clear way to producing a pioneer project. My hopes had been diminished by the lack of traction I was finding in another project. My own personal mood was low due to the national situation and restrictions. I can clearly recall feeling ‘Zoomed out’, weary of video conference and feeling zero energy to start an online community. I have started online communities in the past (one was around a collaborative Knowledge database) and had some good experiences but felt much effort had been expended with far fewer people engaging than I had imagined. I really had a personal need and longing for rich personal relationships face to face.

As we started to experience a strong initial response and interest I felt a surprising surge of energy. It did not feel like the online community I had dreaded as being energy sapping. Infact it was giving me energy. I was delighted to work with my kids on it: one son shared an edge of my desk, the others spread through the house! They had amazing ideas and contributed them. My pride in them grew and respect for their skills - I really did not know the game well!

I was feeling a degree of impostor syndrome too. The early news reports that the diocese picked up on and ran articles on were based on only a few sessions. I was aware this could all fall apart or not scale up, nor be sustained. Minecraft church generated novelty interest. But I was not interested in this; it would be meaningless if this could not actually grow into something I could look at and know was an authentic expression of Church. So there was fear of exposure as an impostor. I was not frightened of failing - I have tried many different initiatives over the years and many have fallen by the wayside. All have been instructive and valuable though.

Currently, however, I feel a growing confidence that God can use me to make this sustainable and valuable and meaningful for the young people and their families. I have a concern that I do draw families in too - I don’t wish this to be a children only thing but something for all ages. This is a small nagging concern, but my predominant feeling at the moment is joy and confidence.

My image is something I made in Minecraft. I ran a sculpture competition over half-term and anyone could take an 16x16x16 cube of quartz blocks and sculpt something representing their experience of lockdown.

I sculpted a pyramid on which was a wide square room with expansive glass windows, flowing water, rich plant life growing there. I let some of the water spill out of the windows and onto the ground.

Entry is through the base which turned into a claustrophobic twisting maze. It is actually only one passage and leads around and into the centre where a stone stair squashes you in as you ascend in the darkness till finally emerging in to the top wide room.

I took time to look at the sculpture with my Spiritual Director. I was conscious when building it that I was following the journey my feelings had been on over the months.

I was drawn to Psalm 40, the cry of the person sinking in the mud, unable to get out, but still reaching for hope in God. The line 'stood me on solid rock, to make sure I would not slip' feels extremely appropriate for this.

I wanted the plant growth in the upper room to be both naturally occurring and also intentionally planted. There is nurture here but there is also a form of 'gardening' of taming what is naturally teeming with life around. 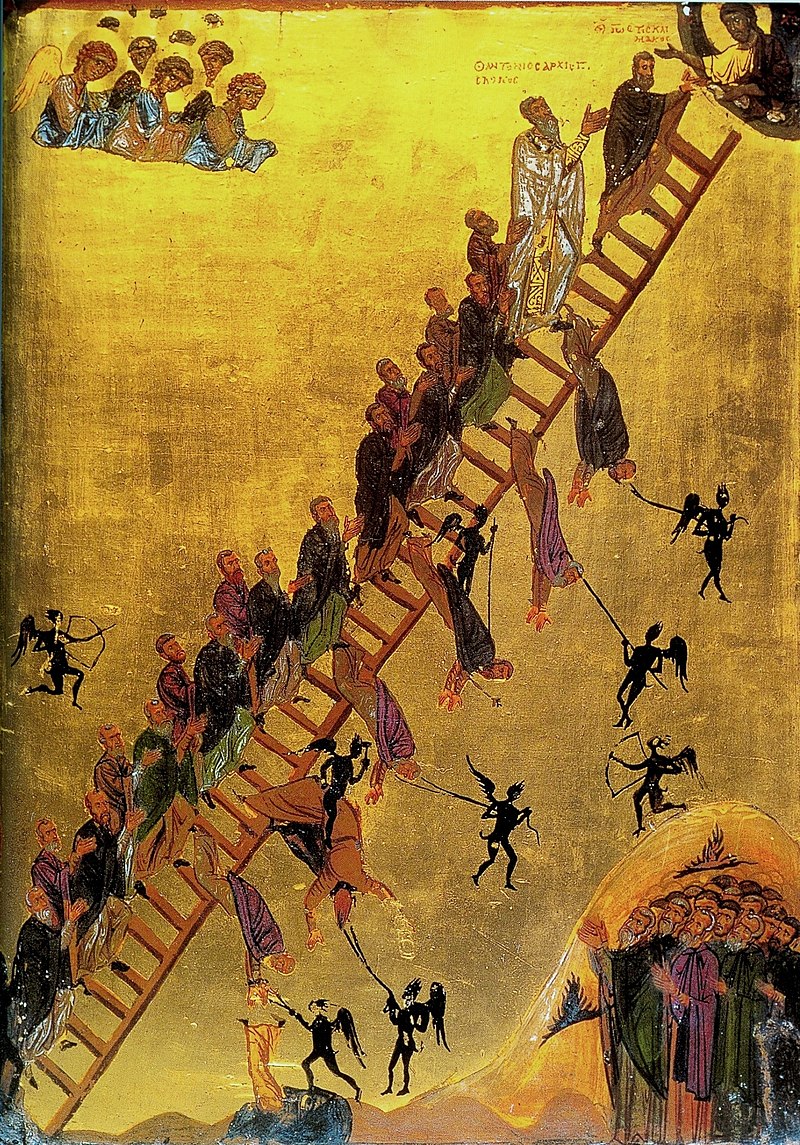 From tradition I recall the 'Ladder of Divine Ascent', which is an ancient Monastic illustration of discipleship that the monks followed. They painstakingly climb Jacob's ladder, being beset by demons and temptations to pull them down. This is a familiar feeling of hard won progress that I find surprisingly helpful as a pioneer. It reminds me of the need for faithful perseverance and tenacity.

As I continue to ponder I become aware that there is a flip-side to the feelings of 'impostor syndrome'. That is a reaction into driving things forward in order to make me secure. What I am doing, if it is from God as I trust, is not for my benefit, but from the gifts and grace God has given me and others. There is growth here. Gardening can not be hurried yet also can not be avoided!

The key action here for me is two fold. To continue to climb and to overcome each and every obstacle. Yet, not because I need to prove myself or try to be more authentic. I need to welcome and appreciate the growth. To keep noticing the light that God is shining in on what we are doing, the growth of spirituality and the positive benefit it is to me.

Clearly that is to be shared around. I need to remember gaining sudden attention and some quick growth is not wrong and can be authentic. I feel it should be channelled towards others to inspire and encourage them.

What surprises me still is that what I did not really think I wanted to do has become a rich and life-giving.